WHAT IS A COPPER DOG?

Man's best friend, as the saying goes. Copper Dog is that and more – a companion for everyone and for every occasion. Familiar. Inclusive. Friendly and relaxed.

In years long-past, the colourful characters grafting in Scottish distilleries would help themselves to a dram using a Copper Dog; a pipe hidden inside the leg of their trousers. They would fashion their own vessels with scraps of metal from the cooperage, soldering a penny on one end and keeping the dram safe at the other with a cork. A chain attached to belt or braces would make sure the whisky was kept on a tight leash. 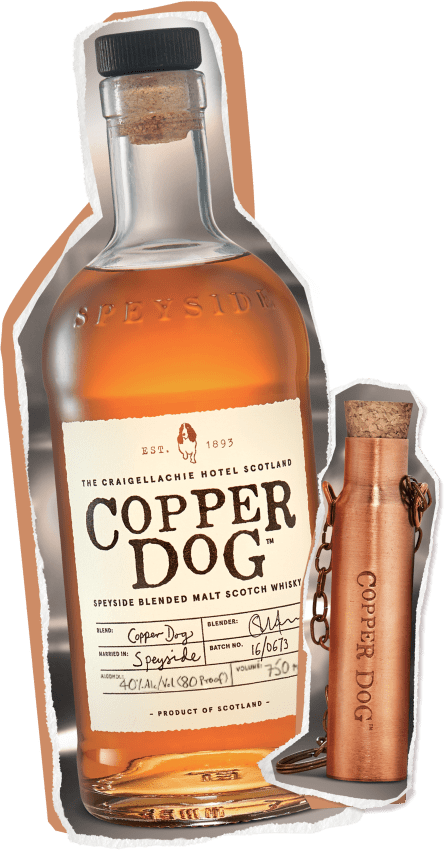 INSPIRED BY THE
RASCALS OF SPEYSIDE

The largest whisky region in Scotland

Welcome to
our world 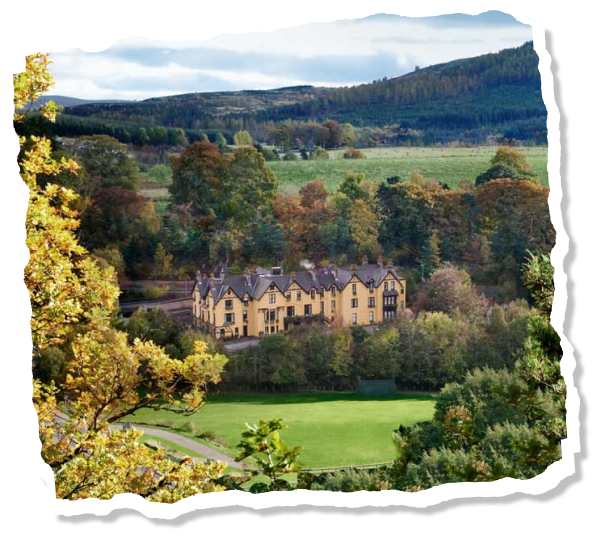 This luxury boutique hotel offers scenic views of the rivers Spey and Fiddoch, the Thomas Telford Bridge and surrounding mountains. The hotel is located in the heart of Speyside whisky country. The hotel strives to represent everything that is great about Speyside; great food, great beverages and great hospitality. Come and visit us, we’d love to see you!

BORN IN THE PUB 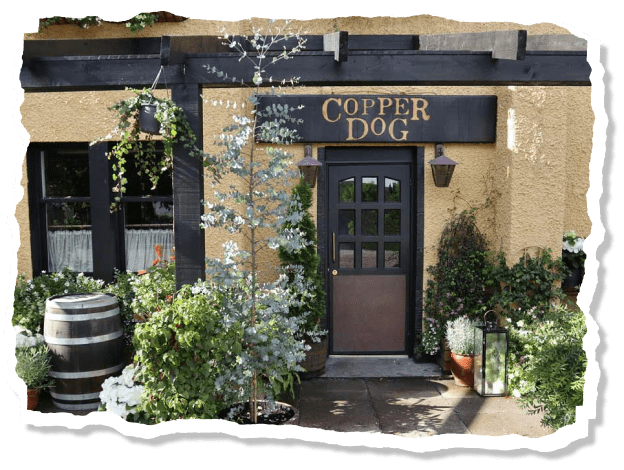 The Copper Dog is the warm and welcoming pub at The Craigellachie hotel.

The pub has been a firm favourite with locals and tourists alike for many, many years. Copper Dog whisky comes from the pub and was created as a tribute to the local Speyside rascals who worked in the nearby distilleries. They have frequented the pub since 1893, gathering to share their spoils and tell their tales.

A tribute to the workers

In 1707, the British crown drove whisky production underground. Scotland became a hot-bed of spirit smuggling. Renowned for its remote Highland location, Speyside was a smuggler’s paradise with stills and bothies hidden in every nook and cranny. Whisky was heavily taxed – landowners were getting rich and ordinary people were suffering. Illicit distillation became a form of rebellion.

A century on and more than half the whisky consumed in Scotland was still being enjoyed without payment of duty. In 1823, the House of Lords finally managed to get the industry back under control and whisky became big business. But there were still strands of rebellion: the workers. Raised in a century-old tradition of smuggling, the stills-men continued to take. In Speyside, they blended from wherever they could, using all kinds of tricks to get their own blends home and away. 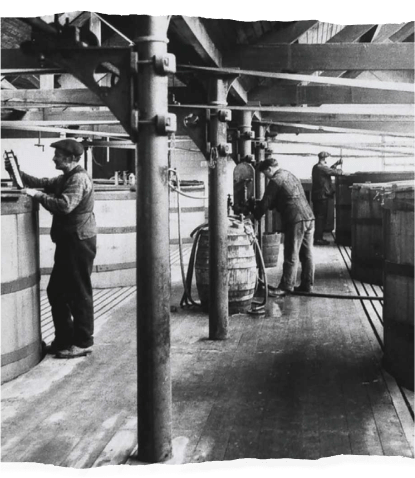 The most celebrated was a nifty little device known as the ‘copper dog’, a piece of tubing with a penny soldered to one end and a cork in the other. A man’s best friend because it never left its owner’s side. Distillery workers hid these copper dogs down their trousers and in their belts, pilfering a dram before secretly sharing them around their local pub, comparing notes and hatching plans. Today, at the heart of Copper Dog lies the belief that everyone should have the opportunity to come together and enjoy great Scotch. 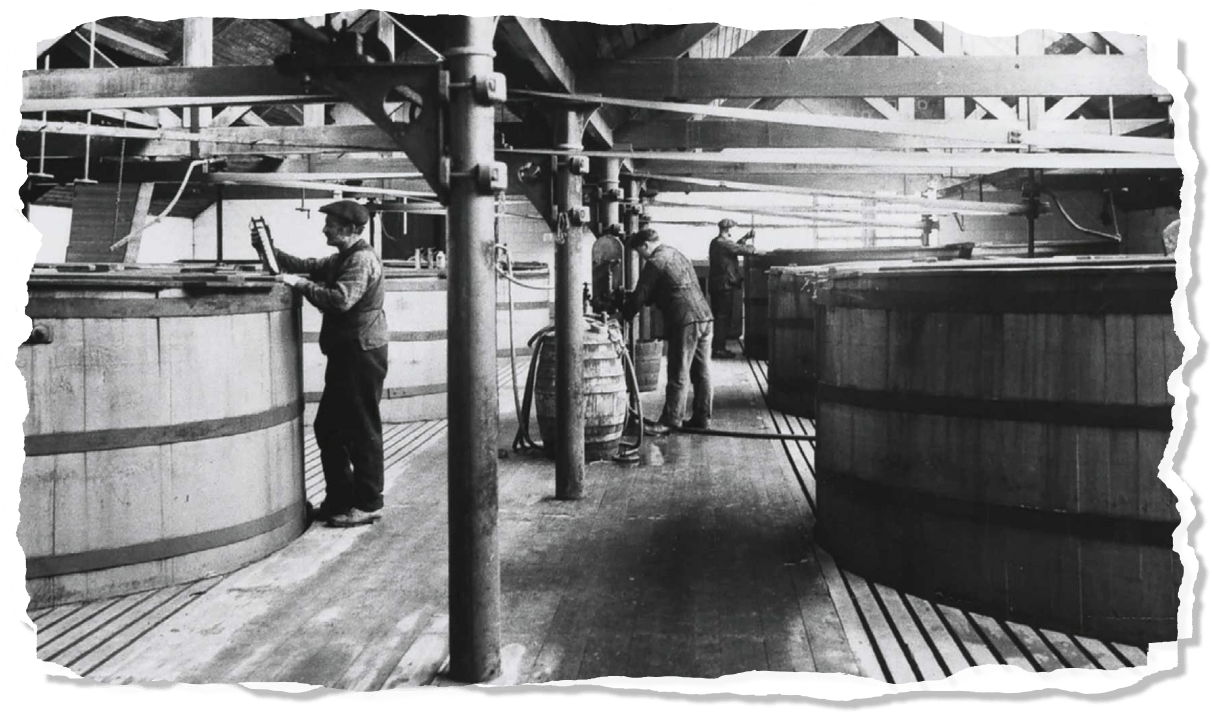 THE SPEYSIDE BLEND THAT MIXES WITH EVERYTHING

Piers Adam is an entrepreneur and founder of some of the world’s most influential bars and clubs, including London’s iconic Mahiki and Whisky Mist.

In 2014, Piers bought the Craigellechie Hotel. Inspired by local tales of the Speyside smugglers, he christened the hotel pub the Copper Dog and instigated the creation of a whisky of the same name, testing the recipe on very appreciative local pubgoers. Highland travellers and local distillery workers still drink in the bar today. 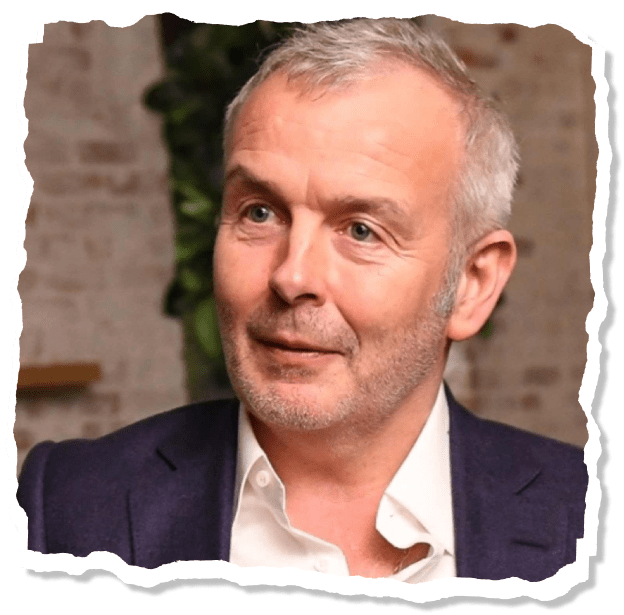